The first quarter of 2019 has been very busy for the Recasens USA team as we traveled across the country attending many industry events. Our first stop took us to Long Beach, CA, to the Marine Fabricators Association National Convention in January. We were so pleased to see one of our customers, SewLong Custom Covers, walk away with a 2019 MFA Fabrication Excellence Award for Tops! This was truly the highlight of the event for us. Congratulations to Justin and his team for a well deserved honor.

We quickly packed up for the trip back to the East Coast where we attended the North East Canvas Products Association Expo in Warwick, RI. This annual event brings together the top manufacturers, distributors, fabricators, retailers and service providers from across the region to see the latest innovations, gain new insights, and connect with other industry professionals. We had an excellent time at the event connecting with colleagues new and old.

February brought us back to California for the Western Canvas Products Association Expo & Annual Meeting in San Diego. We enjoyed meeting more industry professionals from the West Coast and were very pleased by the reception given to our new RECacril® 60” Collection Stack Book. Not only was it a hit with show attendees, but with distributors alike. Martin Aardewijn from Globe Canvas Products Company shares: “The swatches are bigger than all of our competitors so it is easier to visualize the larger stripes and the way the spine of the book is designed allows the book to stay open on a table to make viewing the stripes easy. The stripe patterns are also in color families making it easier to focus on and select from a specific color range. These simple details make the sales process easier and quicker!”

2019 has definitely started in high gear for Recasens USA and we look forward to maintaining this momentum throughout the rest of the year. Stay tuned for news on upcoming events where you’ll be able to connect with the Recasens team and see our latest product innovations.

From Dream to Reality — The Evolution of SewLong Custom Covers

By Doug Dubay | Webinar | No Comments

About 20 years ago, Justin Jones of SewLong Custom Covers saw the new Gemini hinge and it gave him a great idea. From that idea came the first iteration of custom boat tops for which SewLong is known. SewLong recently launched the third version of its popular folding canopy top, winning the coveted Marine Fabricator Association 2019 Fabrication Excellence Award for Tops.

Join us on April 9, 2019 at 11am ET (9am MT) to hear Justin’s story. Find out how his first idea became a product, and how it evolved over time to become one of the top products in the industry. Learn why SewLong prefers RECacril® by Recasens USA as its fabric of choice, and why its tops are so popular with marine enthusiasts. 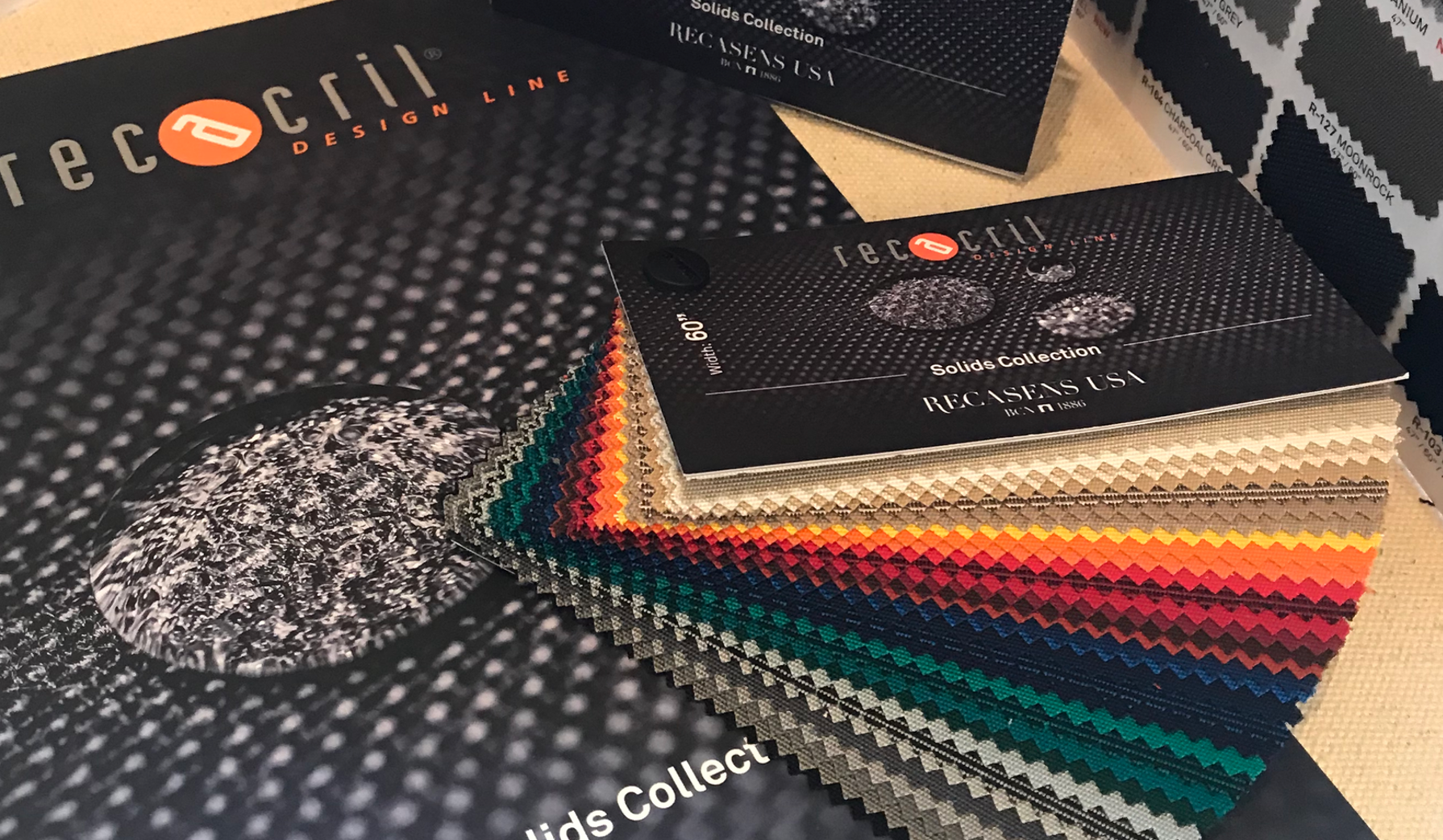 The RECacril® 60” Collection Stack Book is one of our most popular sales tools, especially with reps who spend a lot of time on site with clients. Just ask Chris Nash of Vaughan’s Fabric & Supply:

“The Stack Book is a great alternative to the bulk of a standard sample book. It’s small enough to slip in your pocket and take on location to easily compare colors for customer projects,” says Nash. “The swatches are big enough to give a customer a proper idea of the fabric that will be used in their project, and I find that the way this book fans out like a deck of cards is perfect for viewing options side-by-side without having to flip back and forth between swatches. The Stack Book is the perfect fabric color reference for busy sales reps and design consultants.”

Measuring just 2.5” x 5”, the RECacril 60” Collection Stack Book is constructed as a pivoting fan so that each swatch can be viewed individually or side-by-side for color comparisons against each other and/or a customer’s decor. Each swatch is also large enough to allow for easy feel and viewing of its density and tightness of weave. The book features a convenient index of all colors for easy reference.

The Recasens Stack Book includes samples of our full range of 60” RECacril fabrics. To add it to your collection of RECacril sales tools, please contact your Recasens distributor or Doug Dubay.

McGee Blinds & Awnings has been manufacturing custom awnings, outdoor structures and window coverings for the Pacific Northwest area since 1971. Serving both commercial and residential customers from their Portland, OR location, there’s not a structure, product or fabric that it hasn’t worked with in its nearly 50 years of business.

Family owned and operated, McGee has a long-standing reputation for providing exceptional service and quality products, many of which are provided by trusted distributor and next door neighbor, Vaughan’s Fabric & Supply.

“We’ve worked with Vaughan’s for years, not simply because they’re next door, but because they’re an exceptional business partner,” says Coleen Hardenbrook, President of McGee. “So when they suggested we give RECacril® a try, we knew it had to be a quality product.”

Vaughan became a Recasens distributor in 2016 and General Manager, Chris Nash, immediately brought some samples next door to share with Coleen.

“The first thing I noticed about RECacril was its stiffness,” Coleen comments about the fabric. “It has a great feel to it and hangs and sews much nicer than other fabrics. It doesn’t pucker.”

“RECacril comes in a 47 inch width rather than the 46 inch width of its competitors. That extra inch makes it the perfect size for a standard window awning,” adds Coleen. “ RECacril allows us to use a single panel of fabric which saves our customers money and results in a nicer looking and more durable end product.”

Even though McGee has only been carrying RECacril for about two years, the fabric is now used in approximately 90 percent of its projects.

“We love RECacril, so if given the option, we’ll use it over any other fabric,” states Coleen. “It’s simply the best solution for the job!”

This year’s Marine Fabricator Conference was truly one for the books. Held in Long Beach, CA, the event was hosted aboard the historic Queen Marycruise liner. What better location for a gathering of marine enthusiasts than a 1930’s steamship adorn with gorgeous furnishing and fabrics? This spectacular venue served to highlight an equally great event which we kicked off by co-hosting the opening day luncheon with one of our West Coast distributors, Vaughan’s Fabric & Supply. Throughout the conference we were pleased by the great response to our new stack book and enjoyed connecting with marine industry colleagues both old and new.

The 2019 MFA Conference was an amazing event that will be hard to top. We can’t wait to see what they have in store for us next year!

By Doug Dubay | Press | No Comments

Recasens USA is pleased to announce the recent addition of Innovative Industrial Solutions, Inc. (IIS) as its newest US-based master distributor. This new partnership will provide greater access to the Recasens line of superior quality, European-designed fabrics for fabricators and designers in the awning, marine and decor industries.

Innovative Industrial Solutions, Inc. (IIS) is one of the largest distributors of awning, marine, signage, architectural/structural, and outdoor industrial supplies in the Southeastern US. RECacril® will serve as the premier fabric line for IIS and is available for immediate order. For more information, contact IIS at info@iisfla.com.

Full details of this new alliance are available here.

Oh The Places We Will Go…

Come See Recasens USA at These Exciting Events Across the US

The next few months will be jam packed with exciting events for the Recasens USA team as we travel across the country showcasing our much loved fabrics.

December has already found us in Louisville, KY, for the annual  IFAI Zone 7 Meeting held at the historic Churchill Downs racetrack. What a great event at an amazing venue!

January takes us to sunny California where we’ll be attending the Marine Fabricators Association National Convention, January 10-12 in Long Beach, CA. Followed by a quick trip back to the East Coast for the Northeast Canvas Products Association Expo in Warwick, RI, January 24-26. This annual event brings together the top manufacturers, distributors, fabricators, retailers and service providers through the region to see the latest innovations, gain new insights, and connect with colleagues.

February takes us back out to the West Coast for the Western Canvas Products Association Expo & Annual Meeting in San Diego, CA. Come see us here February 14-16 as we showcase our latest patterns and colors.

We’re kicking off the beginning of 2019 with lots of activity and hope to see you out there. Stop by and see us at any of these events, we’d love to see you!

A Partnership in Quality – ShadeTree Canopies and Recasens

For over twenty years, ShadeTree Canopies has been creating quality, custom-designed canopies, pergolas, awnings and other outdoor structures for discerning residential and commercial customers throughout North America. Known for its hands-on, consultative approach, ShadeTree is a company committed to quality through and through. See why this unerring commitment to creating only the best brought ShadeTree to Recasens. 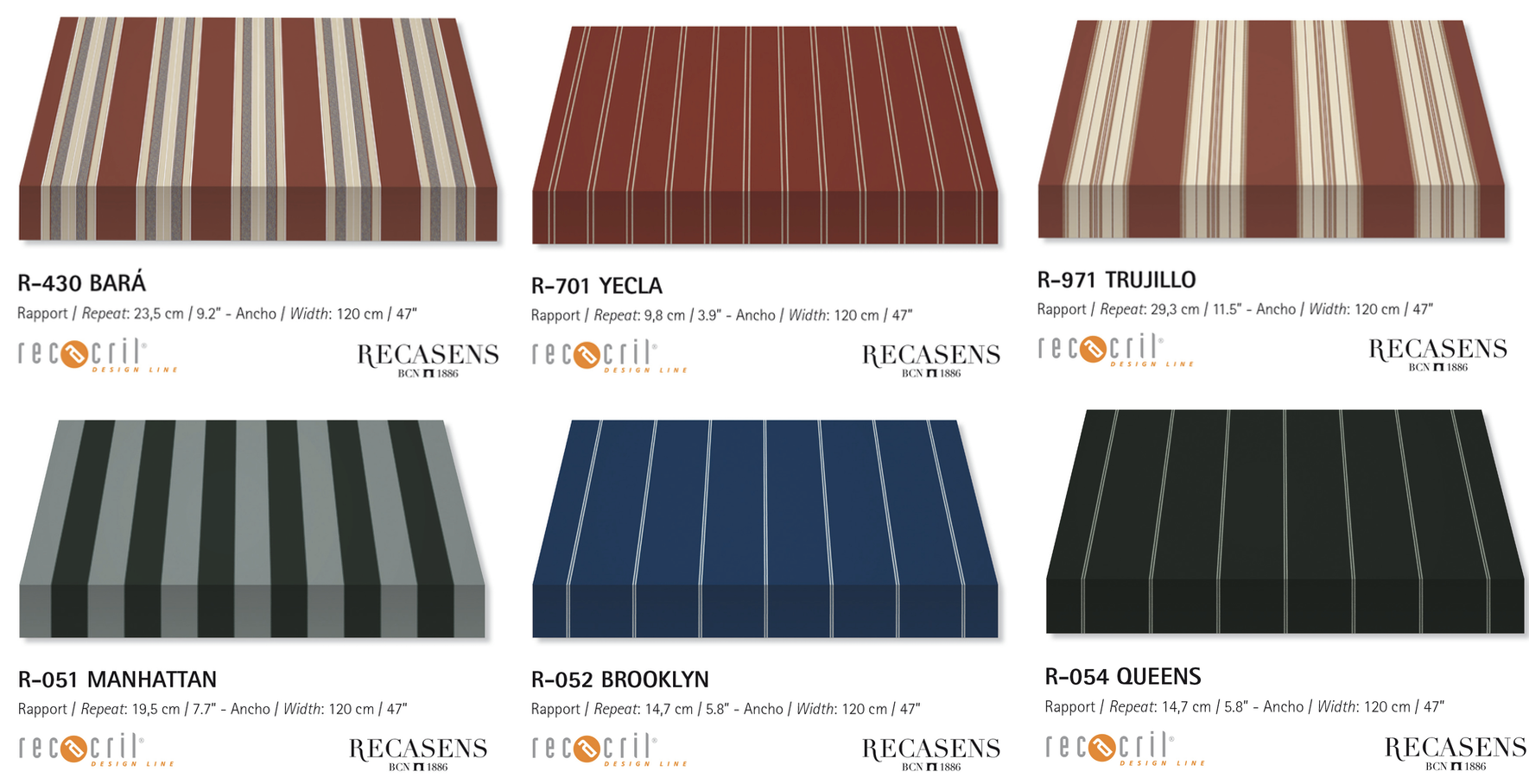 From warm brick reds and golds to cool blues and bold black and white, stripes are still dominating the awning fashion scene in colors spanning the rainbow. Some of our most popular stripes are still walking on the decidedly bold side pulling together warm combinations of brick and gold seen in our Bara, Yecla and Trujillo fabrics. Tapping into the bold sophistication of their NYC namesakes, our Manhattan, Brooklyn and Queens fabrics manage to be both bold and understated at the same time in a way that only true New Yorkers can understand. Check out our full line of RECacril® stripes today online or request a sample book. 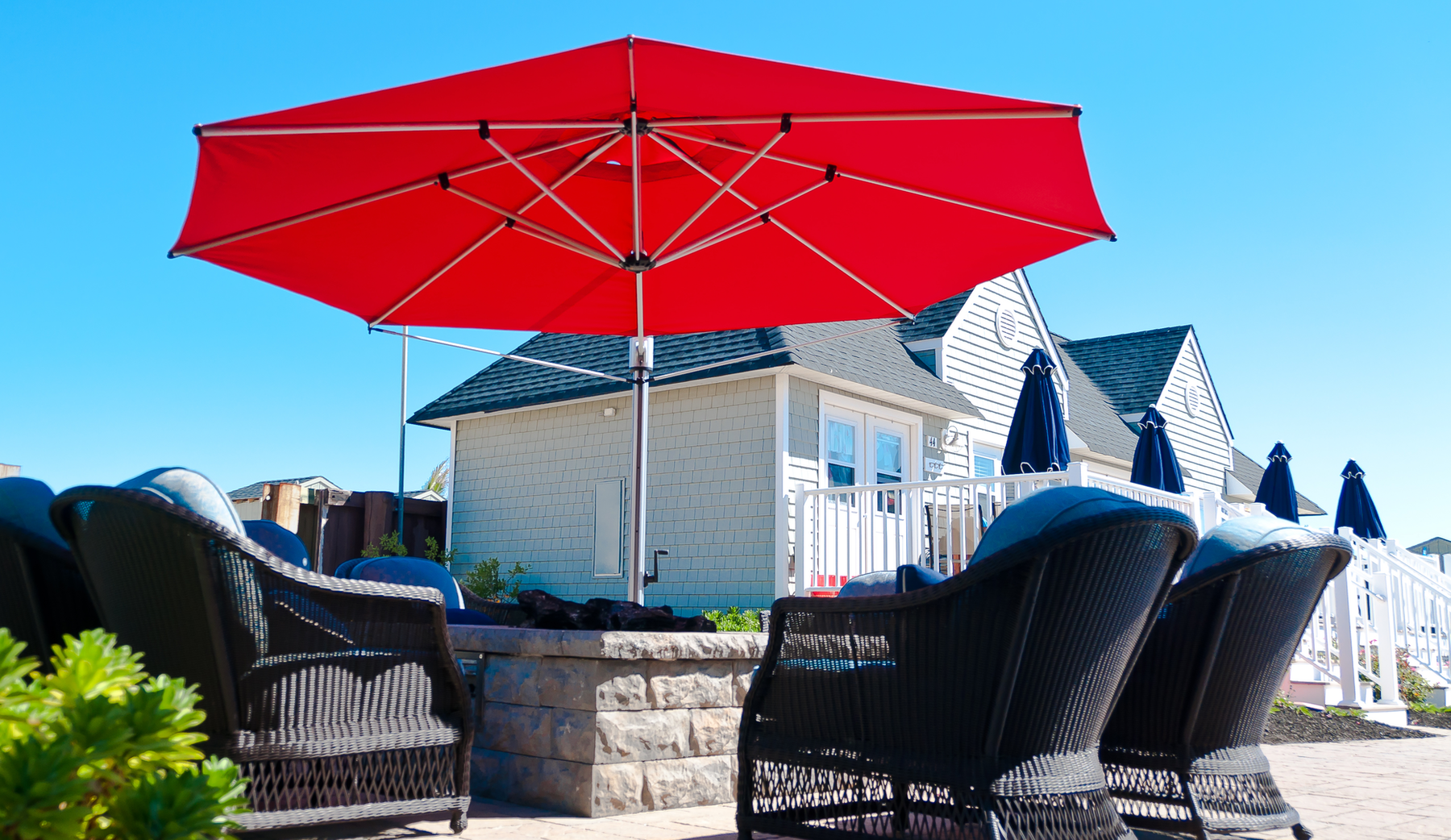 Birds of a Feather – Recasens and Frankford Umbrellas

Partnerships work best when the parties involved share the same values, goals and work ethics, so it’s no wonder that the working relationship between Recasens USA and Frankford Umbrellas was a success right from the start. With both companies being family-owned and operated, as well as boasting long histories marked with innovation, quality products and stellar service, the fit came naturally. Learn how this high-end umbrella fabricator took a chance on a relative newcomer to the US fabric market and found a supplier who brought a whole lot more to the table than just fabric.